A few years ago, a friend and I were in Philadelphia. We saw some awesome places, went to Eastern State Penitentiary (one of the coolest places I've ever been to), tried to find the Rocky stairs, we went to the JFK Plaza, Magic Gardens, and toured Old City (my fave place), and more.

We spent one evening taking a "ghost tour" of the city. It was very neat: an nighttime walking tour of Philly with the added spice of fun little haunting tales of the area. Of course, I played around on the tour. You know, all, "I'm gonna see a ghost!" and trying to get myself on edge, but I couldn't really get myself scared. Besides, the tour was late, and I hadn't eaten dinner, and I was starving by the end. So, naturally, my brain started to focus on food as the tour progressed. Once it was over, we were on the search for a meal.

As we walk down S 3rd, we spot this awesome bar/restaurant, National Mechanics; the large, tall front of the building featured a combination of the classical orders of architecture (trying to remember the specifics from art history, but totally drawing a blank -- Ionic? Doric? Corinthian? haha) with several steps to the door, columns, big beautiful windows -- a quick glance on the website shows that it used to be a bank. Makes sense. Anyway, the darkish, one way street is empty. My friend is to my right, about twenty feet away. As I cross the street, someone grabs my shoulder and pulls it back. Startled, I say "What?" and turn, only to find nobody there. I turn to look at my friend, who is a good fifteen feet away, and then I rub my arm. It was a weird sort of grab, really hard to explain, but I distinctively felt four pressure points (fingers) on my arm, and they were hot; it was almost like pins and needles. And then, naturally, I bolt.

When I'm safe on the sidewalk, I kind-of laugh. Of course, I've just been on a ghost tour, of which the entire time I'm saying, "I'm gonna see a ghost!" and joking about it, so when I say "I think a ghost just grabbed me!" we both laugh it off. But almost instantly, I start to feel funny. We walk up those steps and I take a seat on the edge of the bar, and order some delicious vegetarian meal (with fries, of course) and a drink, but all I could think about was how my arm felt hot and weird. Half joking, half not, I text my mom: "I just got grabbed by a ghost!" And then, as we eat dinner, I start to forget about my arm. And that's the end of it.

Or so I thought. 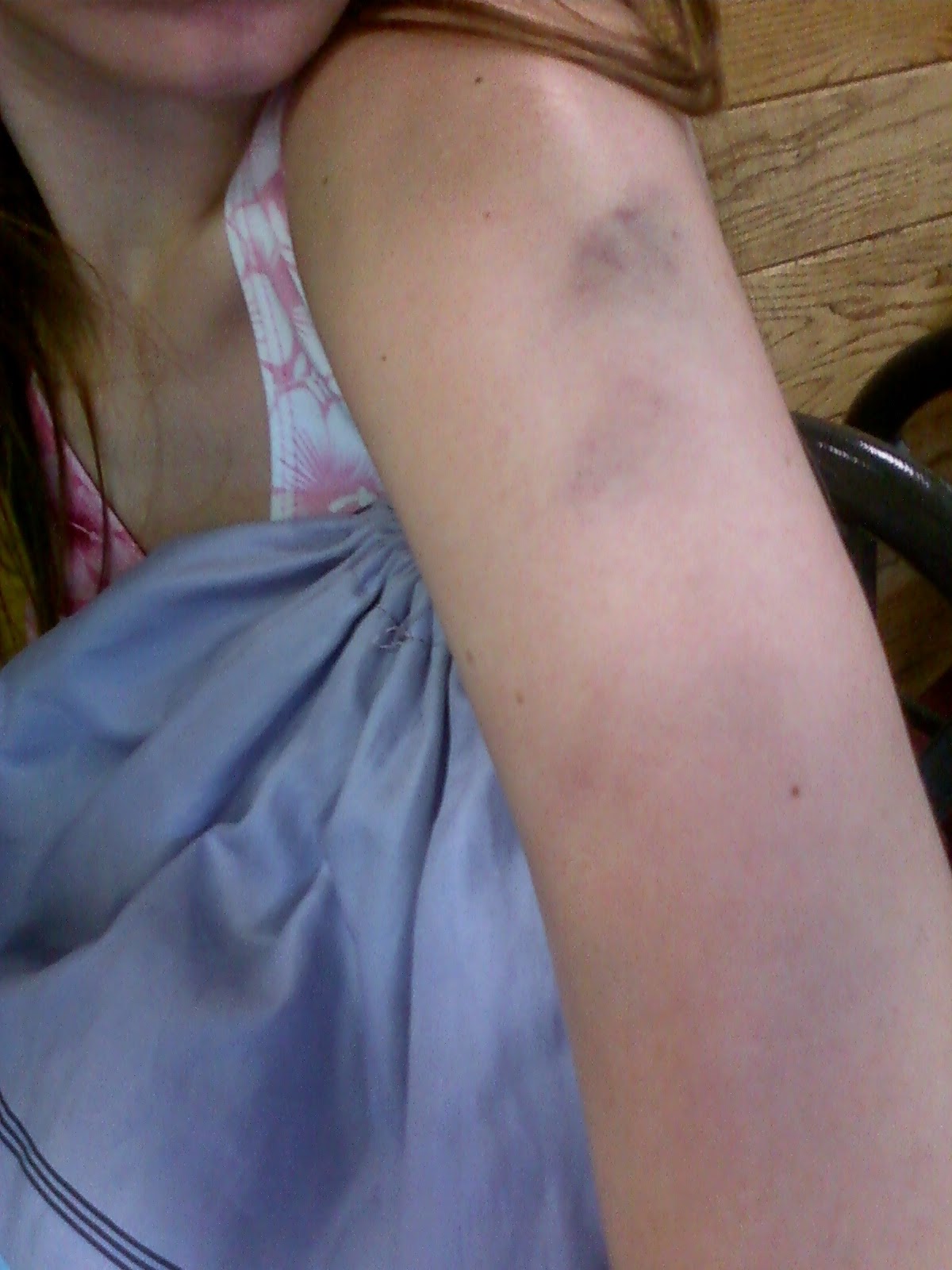 Two days later, we're on our way home from Philly. We stop at one of the rest stops off of I-95. I think it was the Chesapeake House. We're sitting at the table, and I catch a glimpse of my arm, and I notice some bruising. "Oh my God, what happened?" It took a little while thinking about how I could have possibly hurt myself before the "ghost" encounter even entered into my mind. I immediately snap a picture, because, come on, it was just too weird. And, because I'm weird and take pictures of my injuries to send to my mom or sister (come on, tell me you've never done that...hahaha), I know from experience that it's hard to get a picture of a bruise that really shows up well, but pictured to the right it the best I could capture with my 2MP camera (I really wish it could have been clearer!). When I reach my right had around and lay my fingers over my arm (below the top bruise) it matches exactly with the curvature of how fingers would lay on my arm, if, say, someone had grabbed it. Weird, huh?

So, about a week or so earlier, I'd had a tetanus shot. Somehow, someway, this was probably the cause. The very top bruise, that was older, and that was from the tetanus shot. I am not trying to say that's a "ghost grab." I did some looking into it, reading on side effects, I talked to my mom (who was a nurse), and one of my friends who was working at passport health, where she gave vaccinations on a regular basis. Both of whom said it would be kind of weird to get a reaction from a shot a week later. In general, I could find nothing about weird neurological symptoms that would send hot tingling pin pricks down your arm and cause new bruises to form a week after a shot. So, ghost or not, it was pretty weird.

Posted by Jacqueline Bach at 10:48 PM