I am THRILLED to be sharing with you an interview with the amazing Kim King! I was fortunate enough to share my thesis experience with this wonderful and supportive poet who I am now happy to call my friend. In honor of National Poetry month, I bring to you, the writing process of Kim King! 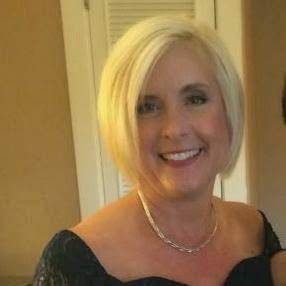 Kim King's poetry has appeared in a number of journals and anthologies, including Prompted, An International Collection of Poems, Wild Onions 2013 and Wild Onions 2014, Point Mass, In Gilded Frame, The MidWest Quarterly and The Road Not Taken. She lived and studied in France before becoming a high school French Teacher. She has an MA in Writing from the Johns Hopkins University and writes from her home in Hershey, Pennsylvania.

And now...onto the questions!

JB: What do you write?

JB: What is your writing routine like?
KK: My writing routine is not a routine, because I teach French at two different high schools every day. Sometimes, if I have an idea percolating, I will drop everything to get it down, but I always have lessons to plan and papers to correct. In the summer and on weekends, I have time to write. I like to write in the mornings, when the sun is hitting the patio. I'll make a pot of coffee, take my journal outside, listen to the birds, smell the grass, and start writing. I prefer quiet to write, so I find writing in a coffee shop distracting, unless I put on headphones. I often write poems directly on the computer, but the distractions of email, Twitter, and FB get me off task. Following an interview that I read in The Paris Review with Billy Collins, I've returned to the journal and pen. I ordered the same pens and journal that he mentioned, hoping that they'll bring good writing karma.

JB: When you are preparing to write a new poem, what kinds of techniques or methods do you use to organize your ideas?
KK: Usually, poets will say that the poem writes itself. For me, when I have an idea, an image, or a metaphor that is rattling around in my head, I'll write down those first few words. Sometimes a title comes first. I'll try to think of concrete images to connect to those first words. I may do research on whatever it is I'm writing about, like the types of trees, names of flowers, descriptions of how bridges are built, or historical or literary information. I'll write one line, and then another, and just keep writing until it ends. I'll read what I have written and decide whether or not the poem needs to be written in a certain form. Some poems come out as sonnets and others as free verse. I may rewrite a free verse poem in iambic pentameter blank verse, if that's how it sounds best. I may start out writing a sonnet and decide later that the poem does not want to be a sonnet. I experiment.

JB: While you are working on a piece, do you have any particular way that you structure your work?
KK: Once the poem is down, I transfer to the computer and always write in Times New Roman twelve point double spaced, as my professors at Johns Hopkins required. Once it's on the computer, it's easier to move the lines, to add and delete words, and to play around with the form. I'll save the first version by a title or by the first line of the poem. Later, when I work on it again, if I make major changes, I'll rename it as the "Title2", "Title3", etc. When the poem is where I want it to send it out for publication, I'll rename it "TitleFinal." I keep my poems in files for each year. When a poem is sent out for publication, I move it to a "Submissions" file. I keep a document with all the names of the journals where I submitted, the dates of my submissions, the title of the poems that I sent, and the deadlines for responses. I update that file with "Accepted" or "Rejected" when I hear from the publication. This way I can be sure that I do not send simultaneous submissions to journals that do not accept them.

JB: Can you tell me a little about your revision process?
KK: Revisions are tricky. I'll go back and tweak a poem many times, trying to tighten it up and eliminate unnecessary words. I'll double check the meter, if it's in meter, and concentrate on end words and enjambment. I want the end words of each line to carry a punch of sound or meaning. I'll look for words that I've used twice, find another synonym, and change one of them. I want each line to pull the reader to the next line. If the reader gets bored or lost, he or she will never finish the poem. I have a few trusted poets that I may send the poem to for another pair of eyes. They may find a tense shift, a preposition, or a metaphor that doesn't quite work, and I'll revise it again. I revise until I cannot find anything else to fix. I usually have the most trouble with the endings. I have to decide if the poem is complete, or if it needs another stanza.

JB: And so, Kim, my final question for you is...why do you write?
KK: I write because I have ideas for poems in my head, or because I'll see something that I want to tell someone else. I wrote a poem about domestic violence after I saw a man smash his wife's head into boxes of candy at Costco. I wrote a poem about a crippled man begging at an intersection on North Avenue in Baltimore, because I saw a girl hand him a lunch out her car window. I wrote many poems about my father, a World War II veteran, because I wanted to preserve my memories of him for my children. He told great stories and taught me all about life and how to be a good citizen. I wrote a series of poems while I was going through medical procedures for a possible breast cancer diagnosis. Those poems tell the story from the first phone call to the biopsy and then to the negative results. I wrote most of them in the waiting room or while staring at the ceiling in the hospital.

I look around me every day, especially when I'm driving, and I see something that triggers an idea for a poem. The idea may lay dormant for a while, but eventually, I write about it. I've been driving and jotted notes down for a poem on the back of an envelope, and if I'm a passenger, I always have my notebook with me. I often come up with ideas first thing in the morning, when I'm in the shower. When I get out of the shower, I write them down.

Some of my best writing comes from being under pressure, so taking a writing class with prompts and deadlines is a good idea. I also suggest participating in one of the Writer's Digest's April Poem-A-Day writing challenges. Even if the poems are not ready for publication, you have thirty poems at the end of the month to start revising.

Kim is participating in the Poem-A-Day via Robert Lee Brewer’s Poetic Asides Blog you can check out her poems on her blog here! Ksquaredpoetry

I want to give a big giant THANK YOU to Kim King for taking the time to share her answers with us. Remember, April is National Poetry month! So get out there and read and write some poetry!

Want to read more of Kim King? Check out the links to some of her work below, and you can check Kim’s Blog out here: Ksquaredpoetry – or Follow her on Twitter @madkking.