This week I am proud to introduce my friend who I call Spartagus :) I met Gareth on Twitter and read his book Monsters (which you should get your copy of asap!) and we became fast friends! 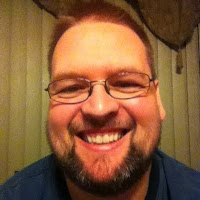 Gareth S. Young was born and raised in Scotland, but has now lived for more than 15 years in the American Midwest. This has played havoc with his accent. In 2010, he published his first full length story, a mystery/suspense novel called Monsters  In April 2013, his short story "The Orange-headed Serpent" was published in the Orange Karen Anthology. 2015 will see the release of Dynamo City: The Wolves of Dynamo, part one of an audacious YA urban fantasy series. Other upcoming works include Persephone, the much anticipated follow up to Monsters  and part two of the Dynamo City saga.

JB: What is your main genre of writing?

JB: What is your writing routine?

GY: I usually write at my desk on the PC or on the couch with the laptop. Invariably I find myself writing at night, since I work second shift and get home late. I have found that my inability to sleep and my imagination intersect perfectly in the evening time. When I'm writing, I often use music to set the general mood, to influence pace, or to focus on a specific emotion. I tend towards music without lyrics, to avoid getting too caught up in the words, and that means I have several movie soundtracks in constant rotation. There's no special food I like to eat. In fact, I prefer not to eat when I'm writing to avoid greasy fingers, interruptions in my typing and, I really need to watch my weight. Plenty of liquids, though.

JB: When you are preparing to write a new story, what kinds of techniques or methods do you use to organize your ideas?

GY: I always try to write down ideas--on bits of paper if I'm not at home, or on the computer if I am. I spend a lot of time thinking about what I'm going to write before I really get stuck into it, just playing ideas out in my head until something feels good. I'll run scenes that will mark the path to the end, although I leave a lot of room for the characters to lead me off in different directions. I like to build the characters from the ground up, giving them a deep history, even if I never use it, and figure out character traits and dynamics between characters. That way, I will be able to write in different voices without feeling all my characters sound the same.

JB: While you are working on a piece, do you have any particular way that you structure your work?
GY: I tend not to get stuck too much in one format, but I like to make sure there's a certain symmetry to my stories. I love the idea of fractals -- a never ending pattern on any scale. You can zoom in and see the same image as if you zoom out. In stories I like the idea that the broad theme of the story can be seen whether you look at the story as a whole or if you're looking at only one character. Sort of like a fractal.

Also, you have to understand the arc of your main character, your character has to "change" in some way, so it's important you know how to affect that change. Sometimes this means breaking down the most important scenes, figuring out where they go in the story, and connecting the dots between. Sometimes it means writing yourself into a corner to see if your character can get out of it. I write important dialogue heavy scenes first as pure dialogue, no description or direction, just to get the beats of the conversation. With action, I do a rough outline to be fine tuned later. I find opening chapters difficult. The first half-dozen are often the most re-written in my stories. Once I get going, though, I am usually able to see the map in my head and I write to that. I'll write down details, dates, times, and all the character information for reference, but my stories sometimes have little shape until I've gone through them once. I actually broke Monsters into three sections/parts/acts to pace it out better. For my urban fantasy I just wrote and the rhythm came naturally.

JB: When it's time to revise/edit your work, do you have any particular methods that you use to help you through the process?

GY: Yes, I use an editor. lol. My first release of Monsters was riddled with mistakes despite the fact I went through it a dozen times. I think after a while, you become blind to your own mistakes, so it's always better to get some fresh eyes on it. I pulled the book and enlisted the editorial services of Gina Hylton (a.k.a. author Regina West), who whipped it into fighting shape. I re-released it, feeling much better about it. Being self-published puts you under a little more scrutiny, and I've learned there's no reason to settle for second best just because you put the book out yourself. Work hard, get help, hire an editor and probably someone to do your cover. The dollars might add up, but its worth it to put out the best book you can.

JB: And most importantly: why do you write?

GY: I write because I remember what it was like sitting in a movie theater as the Imperial Star Destroyer chased the rebel transport through space...and remember watching Bruce Willis realize he was a ghost. I remember racing through the words as Boo Radley rescued Jem...and being shocked to discover the man from The Scythe wasn't just cutting wheat, he was doing the work of Death...and stunned as the hunters returned from the past in A Sound of Thunder to find their own time had changed because one of them had strayed from the artificial path and crushed a butterfly. It is so much fun to be caught up in a make-believe world to the point you are invested in a make-believe character. I don't know why we care about these things, but we do, and the excitement, terror, and satisfaction we can feel from stories is something I want to recreate and share.

* Imperial Star Destroyer chasing Rebel transport? Star Wars of course. A ghostly Bruce Willis? The Sixth Sense. Boo Radley and Jem are from To Kill a Mockingbird. The Scythe and A Sound of Thunder are two classic short stories by Ray Bradbury.

Thank you so much, Gareth, for participating in the Process Project!

Monsters (available as paperback and Kindle ebook)
Posted by Jacqueline Bach at 5:00 PM