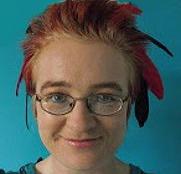 After spending twelve years working as an Analytical Chemist in a Metals and Minerals laboratory, Pippa Jay is now a stay-at-home mum who writes sci-fi and the supernatural. Somewhere along the way a touch of romance crept into her work and refused to leave. In between torturing her plethora of characters, she spends the odd free moment playing guitar very badly, punishing herself with freestyle street dance, and studying the Dark Side of the Force. Although happily settled in the historical town of Colchester in the UK with her husband of 21 years and three little monsters, she continues to roam the rest of the Universe in her head.

Pippa Jay is a dedicated member of the Science Fiction Romance Brigade and Broad Universe, blogging at Spacefreighters Lounge, Adventures in Scifi, and Romancing the Genres. Her works include YA and adult stories crossing a multitude of sub-genres from sci-fi to the paranormal, often with romance, and she’s one of eight authors included in a science fiction romance anthology—Tales from the SFR Brigade. She’s also a double SFR Galaxy Award winner, been a finalist in the Heart of Denver RWA Aspen Gold Contest (3rd place), the EPIC eBook awards, and the GCC RWA Silken Sands Star Awards (2nd place).


You can find all of her titles on her Amazon page or on her website.

And now for the questions...!

What is your main genre?
I write speculative fiction, with or without romance, and for adults and young adults.

Do you think your genre of writing informs your process?
I don't think the genres I write have a huge influence over my writing process. I know lots of authors who write in my genres, and we all have different systems. I know plotters and pantsers, devotees of Scrivener or the Three Act Structure, authors who wake up and decide what genre they're going to write that day and have a year's schedule planned out by lunchtime, and those who write whatever comes to mind. Those who live NaNoWriMo, and those who loathe it.

What is your writing routine​? Do you have any writing rituals?
In summer I love nothing better than sitting out in our summerhouse with the laptop to work. But I tend not to get so much done. During winter I'll either curl up on the sofa with the laptop, or better still on my bed where we get the best of the sun. Morning is usually the best time to write, while I save editing for later in the day when I'm more awake and focused, and more likely to spot mistakes. Most of my stories have their own playlists, albums or tracks I listened to while writing, but lately I've been on a long Linkin Park binge, and have just started listening to Starset. I love alternative rock, or sci-fi-y sounding music (Linkin Park did tracks for Transformers and The Matrix, for example). I also drink waaaay too much coffee and have to keep careful count.

What inspires you?
Everything. That's not a joke. I've had inspiration for a space battle from a piece of paper hitting my car window. A new piece of tech or something one of my kids has said. I came up with an entire YA dystopian short story while taking my daughter to her first music concert simply because I was watching people filter in to this huge concrete bowl of a building, and wondered what would happen if they were pursued by zombies. Music, dreams, and images are my main inspiration though.

When you are preparing to write a new story, what kinds of techniques or methods do you use to organize your ideas?
I often make a bunch of notes and/or bookmark sites for research long before I might start on the story itself. I even have a file called Plot Bunny Storage Facility for random ideas that aren't quite a story in their own right, or for names, bits of technology, even things my kids say that I think might make for a humorous bit of dialogue. If I'm writing SciFi, I'll often research the technology beforehand, or come back to it afterward to fine tune details. For my UF/paranormal, it depends, but quite often I'll just write the story and look up the details later. A first draft will often be dotted with things in brackets such as [research dead bodies in vacuum here] and other gems like that. Getting the basic story down first is the important part.

When do your best ideas come to you? What are your best brainstorming times?
First thing in the morning or last thing at night. I often find if I go to sleep thinking about an issue with my story, sometimes I have a solution when I wake up. Or I do housework. It lets your mind work over while keeping your hands busy, plus I hate doing it so often it gives muse a poke to come up with something.

When you’re on the road and ideas come to you, what do you usually do?​

I always have my smartphone with me, so as soon as we stop I'll make notes on it. In the past I've resorted to crayons or eyeliner on a scrap of paper when stuck for something to write on, or I used to send myself text messages in the days before my smartphone. Otherwise I just keep repeating it in my head until I can get to something to write it on.

While you are working on a piece, do you have any particular way that you structure your work?
Because I often write on my phone, stories generally start out as bits and pieces in OneNote. As they get longer and more complex, I'll transfer them to Word. I don't outline at all, just write it as it comes (and I often don't write linearly either), but in the recent Camp NaNoWriMo piece I tried something new. Someone suggested leaving your MS on a bit of a cliff hanger or mid scene rather than at the end of a completed scene so it gives you a kick-start. It worked quite well (I hit my word target of 20K 17 days in!).

When it's time to revise/edit your work, do you have any particular methods that you use to help you through the process? ​
First up, I set the MS aside for a while, unless I'm on a deadline. Then I do what I call my 'slash and burn' revision, chopping out any dead or redundant areas. Next I go back through and make sure there are no gaps or sudden scene jumps. Then I go through again and smooth it all out. At this stage I often send out to beta readers for a general opinion, to catch any plot holes, inconsistencies or anything that jars. Lastly I go through and check for repetitions, overused words, filtering, passive voice. I use Spellchecker and EditMinion for an additional check, but don't rely on them alone.

And most importantly: why do you write?
I write because I can't NOT write. I didn't write much for nearly two decades, and when I went back to it, I went a bit crazy. The words just poured out and I realised how badly I'd missed it and how much I loved it.

Is there any advice you can give to writers struggling to get the words flowing?​
Housework! Go for a walk, listen to music, or watch a film. Do something else (I love to sew - I've just learned how to make wrist-warmers, and I've started customizing some dolls to look like my book characters to take to conventions). Sometimes it's best to just go off and do something physical, or maybe just try some free writing on something totally unrelated. Maybe a blog post. Don't let it become a chore.

I want to say a big THANK YOU to Pippa Jay for participating in The Process Project!! Need more Pippa Jay? See below!

You can stalk her at her website, Pippajay.co.uk or at her blog, but without doubt her favorite place to hang around and chat is on Twitter as @pippajaygreen.


Want to check out some of Pippa Jay's work? Links below!

Posted by Jacqueline Bach at 5:00 PM